Even by the low-and-then-lower standards of House Democrats, this was well beyond the pale.

Read more below to find out exactly what Democrat Adam Schiff did that has nearly everyone who finds out about it both shocked and disgusted.

He spent the last two years claiming to have super-secret proof of Trump colluding with Russia, being given a permeant spot the Sunday shows to constantly lie about what he actually knew. When it all came crashing down, he paid no price at all, still insisting the evidence was “in plain sight.”

Now, he’s found a new hobby horse. Namely, this Trump-Ukraine nonsense and that meant having a hearing today with the Intel Chief about the “whistle-blower” complaint.

How did Schiff open the hearing? By lying his butt off.

Rep. Schiff re-writes the call transcript for added drama: “I’m going to say this only seven times, so you better listen good, I want you to make up dirt on my political opponent, understand, lots of it, on this and on that, I’m going to put you in touch with people” 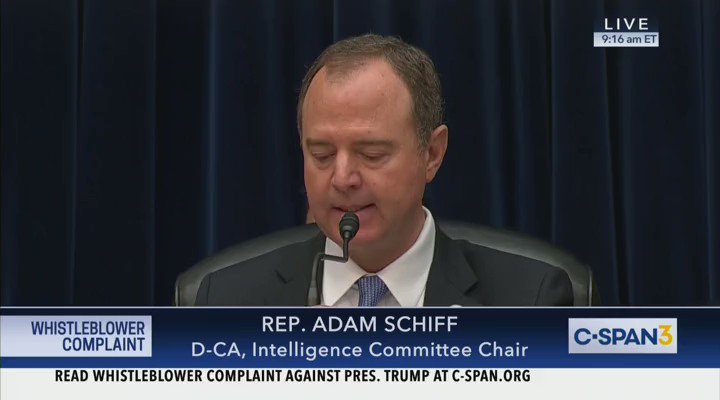 Schiff on making up his own Trump call transcript: That was just a “parody”!

1,471 people are talking about this

NOTE: Ukraine President Zelenskyy has publicly commented it was a good call between him and President Trump and that there was no pressure for him to do anything by President Trump. Again, Schiff is outright lying in his “parody” characterization of that phone call.

Schiff’s entire characterization and quoting of the transcript was patently false. It sought to apply context and motive where there was none. He simply made things up to push his narrative.

Rep. Elise Stefanik, herself no Trump fan, called out this insanity.

It is disturbing and outrageous that Chairman of the House Intelligence Committee Adam Schiff opens up a hearing of this importance with improvised fake dialogue between President Trump and President Zelenskyy. We should focus on the facts.

8,637 people are talking about this

What an absolute garbage legislator this guy is. Democrats claim they want the facts and he goes out and just completely makes up a transcript, presenting it as fact on national TV. How many people watching that hadn’t actually read the transcript? How were they supposed to know he was lying?

Try to imagine what CNN would say if Devin Nunes got up in an official committee hearing and did that crap. Would they chastise him? You can bet your life on it. Instead, the media have basically ignored it, only reporting on Republican reactions (i.e. Republicans pounce) to the bizarre rant.

Schiff’s underhanded tactics likely don’t end with that public spectacle though. It’s looking more and more like he is one of the architects of this entire sideshow.

Adam Schiff was tweeting out allegations from the rumor-mongering anti-Trump leaker’s complaint while claiming that he didn’t have access to the complaint.

Trump is withholding vital military aid to Ukraine, while his personal lawyer seeks help from the Ukraine government to investigate his political opponent.

It doesn’t take a stable genius to see the magnitude of this conflict.

And which media propagandist did Schiff use as a prop to hide the true source of his allegations? One of Fusion GPS’s favorite stenographers of discredited Steele-esque innuendo: Natasha Bertrand.

The whole thing has been a Fusion GPS-style info op from the very beginning.

2,256 people are talking about this

That’s right – the very same Fusion GPS firm that has ties to the Clintons, the Obamas, and the DNC. Congressman Schiff opens up a hearing directly related to an impeachment inquiry of a sitting president by making up his entire opening statement and then later giggling it was intended as a “parody.”

America isn’t laughing, Mr. Schiff. If the Democrat Party had any semblance of responsible decency and/or basic levels of maturity, Schiff would have lost his chairmanship by now.

This is all planned. It’s too well laid out to not be. Schiff was pushing Fusion GPS talking points about Ukraine and Trump weeks before the whistle-blower complaint was even lodged. That’s not a coincidence. It’s a continuation of a long pattern, going back to his Mueller investigation antics.

Schiff is now claiming his fake reading of the transcript was a “parody ” that actually proves how serious this is. Give all of us a break. This guy is a clown and deserves to be treated as such.