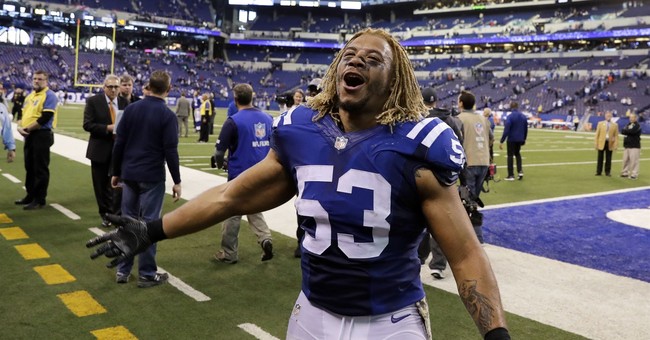 An illegal alien from Guatemala, who entered the United States illegally after being deported twice, admitted to drinking and driving before a crash that killed Indianapolis Colts player Edwin Jackson and his driver Jeffrey Monroe last year. Today, Manuel Orrego-Zavala was sentenced to 43-months in federal prison for illegal re-entry into the country. At the time of the crash, he fled the scene.

“Mr. Orrego-Zavala re-entered the country illegally for the second time before he put the public safety of Indianapolis at risk and took the lives of two innocent men on Feb. 4, 2018,” U.S. Attorney Josh Minkler released in a statement. “This prosecution represents our office’s commitment to charging aliens that illegally re-enter the country, especially if they are a risk to public safety or there is a criminal history present.”

Prior to his first deportation in 2007, Orrego-Zavala committed two felonies in California. After re-entering the United States illegally a second time, he was deported again in 2009. He again re-entered illegally before killing Jackson and Monroe, who Orrego-Zavala hit with his car while they were pulled to the side of the road. In addition to the federal sentence of 42-months, Orrego-Zavala will serve 16 years in state prison for deaths of Jackson and Monroe while driving under the influence of alcohol.

“This individual’s criminal and immigration histories clearly demonstrate a total disregard for U.S. law,” Special Agent in Charge James Gibbons said in a statement. “Let this sentence serve as a reminder that Homeland Security Investigations prioritizes the prosecution of those who are intent on disrespecting our laws and putting the community at risk.”

The Indianapolis Colts released the following statement at the time of Jackson’s death:

“We were heartbroken to hear the news of Edwin Jackson’s passing. Edwin was loved by all in the Colts organization. We admired his outgoing personality, competitive spirit and hard-working mentality. He was well-respected among all with whom he crossed paths, and he will be greatly missed in our locker room and throughout our entire organization. We also understand that another person lost his life in the accident, only adding to our sorrow on this day. We are shocked and saddened by this tragedy, and our thoughts and prayers are with the families of both men during this difficult time.”

Katie Pavlich’s Latest Books, Assault and Flattery: The Truth About the Left and Their War on Women and Fast and Furious: Barack Obama’s Bloodiest Scandal and the Shameless Cover-Up are available on Amazon