While in a meeting with the Prime Minister of Ireland, Donald Trump was asked for his thoughts on Beto O’Rourke’s announcement that he has decided to run for President in 2020. And instead of taking that opportunity to comment on, oh, I dunno, Beto’s policies or really anything to do with politics, Trump decided to weigh in on his hand gestures

WELL I THINK HE’S GOT A LOT OF HAND MOVEMENT, I’VE NEVER SEEN SO MUCH HAND MOVEMENT. I SAID, ‘IS HE CRAZY OR IS THAT JUST THE WAY HE ACTS?’

Yes, how silly would it be if a politician had crazy hand movements? Good thing the President doesn’t display any such gestures. Could you imagine?

Why, that would be ridiculous, and certainly the kind of thing that people would take notice of. 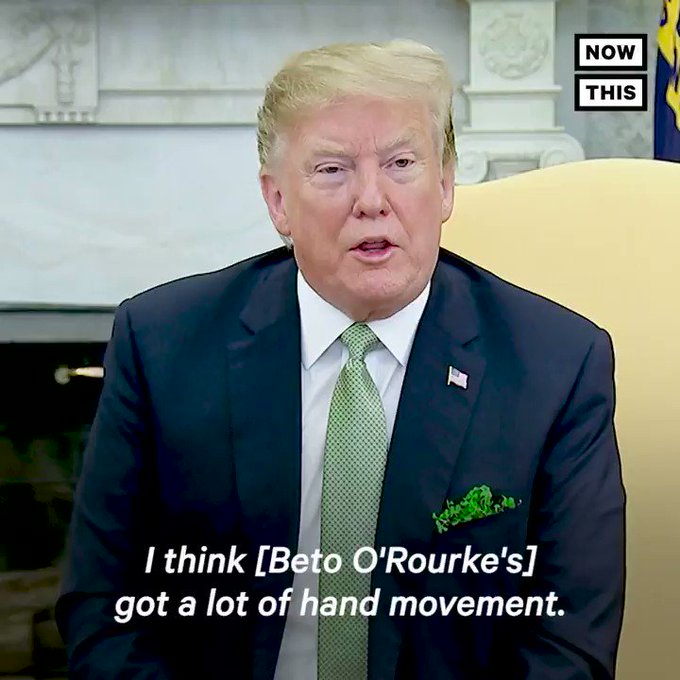 1,643 people are talking about this

I mean, I suppose you could argue that Beto’s hand movements are intended to energize the crowd and emphasize his talking points and other such techniques for effective public speaking.

But that’s probably not it.

And could you imagine how hilariousit would be if Trump ever flailed his hands wildly?? Oh man, what a riot of a hypothetical.

No, never, because then people would have FOR SURE started using that as fuel for comedy, and we would’ve seen it by now.

Good thing he’s got his limbs in CHECK whenever he’s speaking, that statue of a man, our President.

But that would be pretty funny, wouldn’t it?