Police: Smollett organized his own attack for career

Jussie Smollett arrested and faces a felony charge 02:15
“We just didn’t have the total package to support that it was a hoax,” he said. “This investigation didn’t turn in the direction of Mr. Smollett being a defendant until the 47th hour that we had those two individuals in custody.”
Live updates: Jussie Smollett arrested
The “Empire” actor was arrested Thursday morning on suspicion of filing a false report about the January 29 incident and appeared in court in the afternoon.
Smollett was released on bond then went to work on the “Empire” set to shoot some scenes. The company behind “Empire,” 20th Century Fox Television, has previously backed the actor. On Thursday, it said it was “evaluating the situation and we are considering our options.”

The damage Smollett’s hoax has done 06:39
After laying out the plan and rehearsing it, prosecutors says, Smollett gave Abimbola Osundairo and his brother, Olabinjo, a $100 bill to buy clothing and rope for a noose. He also instructed them not to bring their mobile phones to the attack, according to prosecutors.
A statement released Thursday night on behalf of the actor said the bail hearing was an “organized law enforcement spectacle that has no place in the American legal system.”
“Mr. Smollett is a young man of impeccable character and integrity who fiercely and solemnly maintains his innocence and feels betrayed by a system that apparently wants to skip due process and proceed directly to sentencing,” the statement said.
Smollett is due back in court March 14.
Smollett spoke in court Thursday only to confirm his name to the judge. His defense team told the court that Smollett was not a flight risk and cited his philanthropic work in making his case for bail. The judge granted a $100,000 bail, and Smollett paid a $10,000 bond. He was ordered to give up his passport and will remain under supervision until his case is adjudicated.
Smollett faces a felony charge of disorderly conduct for falsely claiming he was attacked by two men on January 29 in Chicago, police say. The attackers yelled racist and homophobic slurs, tied a rope around his neck and poured an unknown substance on him, Smollett alleged.

The attack took place but was staged, Johnson said. The brothers punched Smollett a little, wearing gloves, according to Johnson.
“As far as we can tell, the scratching and bruising that you saw on his face were most likely self-inflicted,” said Johnson.
Investigators believe Smollett staged the attack “because he was dissatisfied with his salary,” Johnson said, citing information that the brothers gave to police.
Police initially treated the attack as a hate crime and were able to ascertain the men’s identities, in part, through cabs and rideshares that they took after the attack, Cmdr. Edward Wodnicki told reporters. They later learned the men were in Nigeria. 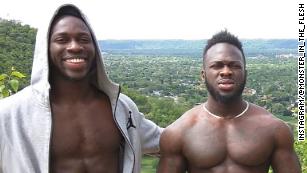 Brothers Abimbola Osundairo and Olabinjo Osundairo.
Investigators met the brothers at customs when they returned to the country, Wodnicki said. Phone records indicate Smollett talked to the brothers about an hour before the alleged attack, an hour afterward and after they had left the country, authorities say.
According to Johnson, Olabinjo and Abimbola Osundairo asked for an attorney once in custody. After their lawyer explained to police that “something smelled fishy,” the men told officers that Smollett, who is black and gay, first “attempted to gain attention by sending a false letter that relied on racial, homophobic and political language. When that didn’t work, Smollett paid $3,500 to stage this attack,” the police superintendent said.
Seven days before the alleged attack, a letter was sent to the Chicago set of “Empire.” It contained white powder and a drawing of a “stick figure hanging from a tree,” police have said.
Authorities determined the powder to be aspirin, police spokesman Anthony Guglielmi said. According to prosecutors, Smollett told Abimbola Osundairo that he was disappointed in the “Empire” team’s reaction to the letter.
Investigators have the check Smollett used to pay Abimbola Osundairo, prosecutors say. The brothers’ motive for helping was money, Johnson said.
“There was never a thought in their mind that we would be able to track them down,” he said. 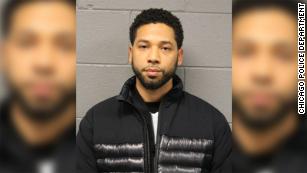 Actor Jussie Smollett is charged with felony disorderly conduct.
After cooperating with police, the Osundairo brothers were released without being charged last week and went before a grand jury Tuesday, Johnson said.
At one point, Smollett’s legal team asked that the grand jury proceeding be postponed so he could provide new details, but “essentially they gave us no new information,” Wodnicki said.
The grand jury heard the evidence, and on Wednesday, police said, the Cook County State’s Attorney’s Office approved a felony disorderly conduct charge against the actor. Under Illinois law, filing a false police report is disorderly conduct and punishable by one to three years in prison.

Source: CNN
Was ‘GMA’ too soft in Jussie Smollett interview? 03:21
“You don’t need immunity when you have the truth,” she said.
Asked why Smollett chose the brothers, who prosecutors say both appeared as extras on “Empire,” Johnson said it was probably because he had a previous relationship with them and “knew that he needed somebody with some bulk.”
Selfies posted on Instagram show the muscular brothers with their shirts off, flexing, and prosecutors allege that Abimbola Osundairo, with whom Smollett has been friends since 2017, had previously worked out with, socialized with and provided recreational drugs for Smollett.

ReplayMore Videos …
Prosecutors allege Smollett directed the brothers to utter the remarks and epithets while attacking him. The attack was supposed to go down at 10 p.m. on January 28, but was postponed until 2 the next morning because Smollett’s flight was delayed, prosecutors say.
Smollett took the brothers to the site where he wanted the incident to occur January 27 and pointed out a surveillance camera on the corner he thought would record the attack, prosecutors say. They say the plan was changed so bleach would be used during the incident instead of gasoline.
After the brothers were released from custody, Smollett’s attorneys maintained their client was the victim of a hate crime and said he was cooperating with police.
“Jussie Smollett is angered and devastated by recent reports that the perpetrators are individuals he is familiar with,” their statement said. “He has now been further victimized by claims attributed to these alleged perpetrators that Jussie played a role in his own attack.”