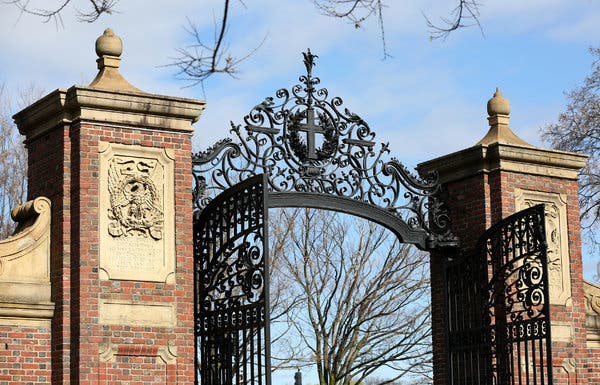 Harvard consistently rated Asian-American applicants lower than others on traits like “positive personality,” likability, courage, kindness and being “widely respected,” according to an analysis of more than 160,000 student records filed Friday by a group representing Asian-American students in a lawsuit against the university.

Asian-Americans scored higher than applicants of any other racial or ethnic group on admissions measures like test scores, grades and extracurricular activities, according to the analysis commissioned by a group that opposes all race-based admissions criteria. But the students’ personal ratings significantly dragged down their chances of being admitted, the analysis found.

The court documents, filed in federal court in Boston, also showed that Harvard conducted an internal investigation into its admissions policies in 2013 and found a bias against Asian-American applicants. But Harvard never made the findings public or acted on them.

Harvard, one of the most sought-after and selective universities in the country, admitted only 4.6 percent of its applicants this year. That has led to intense interest in the university’s closely guarded admissions process. Harvard had fought furiously over the last few months to keep secret the documents that were unsealed Friday.

The documents came out as part of a lawsuit charging Harvard with systematically discriminating against Asian-Americans, in violation of civil rights law. The suit says that Harvard imposes what is in effect a soft quota of “racial balancing.” This keeps the numbers of Asian-Americans artificially low, while advancing less qualified white, black and Hispanic applicants, the plaintiffs contend.

The findings come at a time when issues of race, ethnicity, admission, testing and equal access to education are confronting schools across the country, from selective public high schools like Stuyvesant High School in New York to elite private colleges. Many Ivy League schools, not just Harvard, have had similar ratios of Asian-American, black, white and Hispanic students for years, despite fluctuations in application rates and qualifications, raising questions about how those numbers are arrived at and whether they represent unspoken quotas.

You have 3 free articles remaining.
Subscribe to The Times

Harvard and the group suing it have presented sharply divergent views of what constitutes a fair admissions process.

“It turns out that the suspicions of Asian-American alumni, students and applicants were right all along,” the group, Students for Fair Admissions, said in a court document laying out the analysis. “Harvard today engages in the same kind of discrimination and stereotyping that it used to justify quotas on Jewish applicants in the 1920s and 1930s.”

Harvard vigorously disagreed on Friday, saying that its own expert analysis showed no discrimination and that seeking diversity is a valuable part of student selection. The university lashed out at the founder of Students for Fair Admissions, Edward Blum, accusing him of using Harvard to replay a previous challenge to affirmative action in college admissions, Fisher v. the University of Texas at Austin. In its 2016 decision in that case, the Supreme Court ruled that race could be used as one of many factors in admissions.

“Thorough and comprehensive analysis of the data and evidence makes clear that Harvard College does not discriminate against applicants from any group, including Asian-Americans, whose rate of admission has grown 29 percent over the last decade,” Harvard said in a statement. “Mr. Blum and his organization’s incomplete and misleading data analysis paint a dangerously inaccurate picture of Harvard College’s whole-person admissions process by omitting critical data and information factors.”

[How do you rate a college applicant’s personality traits. Read more here.]

In court papers, Harvard said that a statistical analysis could not capture the many intangible factors that go into Harvard admissions. Harvard said that the plaintiffs’ expert, Peter Arcidiacono, a Duke University economist, had mined the data to his advantage by taking out applicants who were favored because they were legacies, athletes, the children of staff and the like, including Asian-Americans. In response, the plaintiffs said their expert had factored out these applicants because he wanted to look at the pure effect of race on admissions, unclouded by other factors.

Both sides filed papers Friday asking for summary judgment, an immediate ruling in their favor. If the judge denies those requests, as is likely, a trial has been scheduled for October. If it goes on to the Supreme Court, it could upend decades of affirmative action policies at colleges and universities across the country.

In Friday’s court papers, the plaintiffs describe a shaping process that begins before students even apply, when Harvard buys data about PSAT scores and G.P.A.s, according to the plaintiffs’ motion. It is well documented that these scores vary by race.

The plaintiffs’ analysis was based on data extracted from the records of more than 160,000 applicants who applied for admission over six cycles from 2000 to 2015.

They compare Harvard’s treatment of Asian-Americans with its well-documented campaign to reduce the growing number of Jews being admitted to Harvard in the 1920s. Until then, applicants had been admitted on academic merit. To avoid adopting a blatant quota system, Harvard introduced subjective criteria like character, personality and promise. The plaintiffs call this the “original sin of holistic admissions.”

They argue that the same character-based system is being used now to hold the proportion of Asian-Americans at Harvard to roughly 20 percent year after year, except for minor increases, they say, spurred by litigation.

White applicants would be most hurt if Asian-American admissions rose, the plaintiffs said.

On summary sheets, Asian-American applicants were much more likely than other races to be described as “standard strong,” meaning lacking special qualities that would warrant admission, even though they were more academically qualified, the plaintiffs said. They were 25 percent more likely than white applicants to receive that rating. They were also described as “busy and bright” in their admissions files, the plaintiffs said.

One summary sheet comment said the Asian-American applicant would “need to fight it out with many similar” applicants. The plaintiffs’ papers appeared to offer other examples of grudging or derogatory descriptions of Asian applications, but they had been redacted.

In its admissions process, Harvard scores applicants in five categories — “academic,” “extracurricular,” “athletic,” “personal” and “overall.” They are ranked from 1 to 6, with 1 being the best.

Alumni interviewers give Asian-Americans personal ratings comparable to those of whites. But the admissions office gives them the worst scores of any racial group, often without even meeting them, according to Professor Arcidiacono.

Harvard said that while admissions officers may not meet the applicants, they can judge their personal qualities based on factors like personal essays and letters of recommendation.

Harvard said it was implausible that Harvard’s 40-member admissions committee, some of whom were Asian-Americans, would conclude that Asian-American applicants were less personable than other races.

University officials did concede that its 2013 internal review found that if Harvard considered only academic achievement, the Asian-American share of the class would rise to 43 percent from the actual 19 percent. After accounting for Harvard’s preference for recruited athletes and legacy applicants, the proportion of whites went up, while the share of Asian-Americans fell to 31 percent. Accounting for extracurricular and personal ratings, the share of whites rose again, and Asian-Americans fell to 26 percent.

What brought the Asian-American number down to roughly 18 percent, or about the actual share, was accounting for a category called “demographic,” the study found. This pushed up African-American and Hispanic numbers, while reducing whites and Asian-Americans. The plaintiffs said this meant there was a penalty for being Asian-American.

But, the plaintiffs said in their motion Friday, there was no further insight, because, “Harvard killed the study and quietly buried the reports.”

Harvard said that the review was discounted because it was preliminary and incomplete.

At the end of the admissions process, the class of applicants is fine-tuned through a so-called “lop list,” which includes race. Almost the entire page in which the plaintiffs describe that fine-tuning has been blacked out. Mr. Blum, the founder of Students for Fair Admissions, said Friday that it was “disreputable” of Harvard to complain that information was being taken out of context while at the same time insisting on significant redactions of the evidence.

In a heavily redacted section, the plaintiffs describe how Harvard and 15 other elite schools share notes about the race of admitted students at a meeting of the Association of Black Admissions and Financial Aid Officers of the Ivy League and Sister Schools every year. The court papers portray them as a sort of secret society of admissions officers exchanging information about race, a sensitive aspect of admissions.

Harvard’s class of 2021 is 14.6 percent African-American, 22.2 percent Asian-American, 11.6 percent Hispanic and 2.5 percent Native-American or Pacific Islander, according to Harvard’s website.
A version of this article appears in print on June 16, 2018, on Page A1 of the New York edition with the headline: Harvard Rates Asian-Americans As Less Likable, Plaintiffs Claim. Order Reprints | Today’s Paper | Subscribe