This article is the first in a two-part series about the status of red pandas in Myanmar. Read the second part here.

This year, a team of scientists from the Fauna Flora International (FFI) in Myanmar (also called Burma), caught a pair of reclusive red pandas on camera, for the first time ever. The bushy tailed pandas were climbing up a rocky pile of rubble left behind in the region by Chinese loggers. For the scientists, the footage was bitter-sweet.
“When we encountered the two red pandas, we felt two emotions at the same time; incredibly happy for the direct sighting and for obtaining this first exciting footage, but terribly saddened seeing the state of their habitat and threats to the species’ survival,” Saw Soe Aung, FFI’s field biologist who captured the couple on film, said in a press release.
Red pandas (Ailurus fulgens) are not closely related to giant pandas, with recent genetic research placing them in their own distinct family, Ailuridae. Photo by Susan Mainka, WWF.
This footage highlights the rampant deforestation plaguing Myanmar’s dense forested landscape. The country, second largest in Southeast Asia, sits in the middle of the Indo-Burma biodiversity hotspot that includes parts of Eastern India, southernmost China, most of Myanmar and Thailand. According to the estimates by United Nations Food and Agriculture Organization (FAO), about 48 percent of the total country is still forested.
But fewer than 10 percent of this includes primary forests, according to the 2010 FAO study. These primary forests are restricted to the northern and eastern parts of Myanmar, and are home to more 1,700 species of amphibians, birds, mammals and reptiles, and over 7,000 species of plants. Much of these forests are still unexplored and understudied. Myanmar’s forests are also under severe threat due to land conversion for agriculture, logging (both legal and illegal), cultivation of teak plantations, oil palm and rubber plantations, as well as mining.
“Deforestation in Myanmar has historically been concentrated in Ayeyarwady, Mandalay and Sagaing Divisions,” Michelle Owen, Conservation Programme Manager, WWF-Myanmar told mongabay.com “The highest deforested areas are in the mangrove forests of Ayeyarwady Delta, where fuel wood extraction and agricultural expansion have been identified as the main drivers of forest loss. Generally, the principal driver of forest loss in Myanmar is large-scale conversion for agriculture or aquaculture.”
Between 2001 and 2012, Myanmar lost about 1.5 million hectares of tree cover, according to Global Forest Watch. A report released earlier this year by the Environmental Investigative Agency (EIA) stated that much of logging in Myanmar was illegal. Out of a total 22.8 million cubic meters of logs imported by different countries between 2000 and 2013, about 72 percent were illegally harvested. India is the largest importer of Myanmar timber. 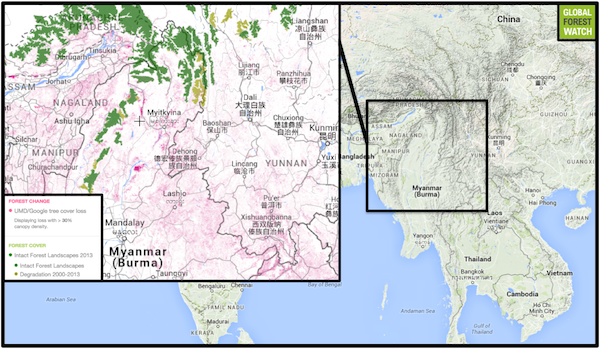 Myanmar’s red pandas live in the very northern peripheries of the country. According to Global Forest Watch, Myanmar lost more than 1.4 million hectares – more than 3 percent of its tree cover from 2001 through 2014. Click to enlarge.

Logs smuggled across the border from Myanmar into Yunnan, China. Photo courtesy of the Environmental Investigative Agency.
As of April 1 of this year, the country placed a ban on the export of raw, unprocessed logs in a bid to save its forests.
“The recent round log export ban and the proposed revisions to the Forest Law and Community Forestry Instruction give us optimism that the country is moving in the right direction to secure more forest for the future as well as giving local communities greater legal rights to manage their own resources,” Colin Poole, Director of Wildlife Conservation Society, Regional Conservation Hub, told mongabay.com.
Among Myanmar’s intact forests is the Northern Forest Complex, which covers an area of about 30,000 square kilometers (about 12,000 square miles), and forms the largest contiguous expanse of natural forests in the country. Four protected areas – Hponkanrazi Wildlife Sanctuary, Hkakaborazi National Park, Bumphabum Wildlife Sanctuary and the Hukaung Valley Tiger Reserve – constitute this complex. Lowland forests, swamps, coniferous forests, and snow-covered mountains make up this landscape that is home to several threatened species like tigers, bears, elephants, hornbills, gibbons, and red pandas.
The excitement over the recent video footage of the two red pandas is testament to how little we know about Myanmar’s wildlife.
The bear-like red panda (Ailurus fulgens), a little bigger than a domestic cat, is found mostly in the cool temperate forests of eastern Himalayas ranging from Western Nepal to China. Distantly related to the Giant Panda, the red panda prefers to eat bamboo, although it occasionally feeds on eggs, birds, insects, and small mammals. An arboreal mammal, the red panda spends most of its time on trees. Listed as Vulnerable on the IUCN List, scientists estimate fewer than 10,000 mature red pandas occur in the wild.
Red pandas (Ailurus fulgens) are not closely related to giant pandas, with recent genetic research placing them in their own distinct family, Ailuridae. Photo by Susan Mainka, WWF.
In Myanmar, red pandas are known only from the northernmost state of Kachin between elevations 2200m to 4800m. According to Poole, they are found in dwarf bamboo and Rhododendron-dominated forests at high elevations of the northern mountains. “Although there is no national population estimate, they remain relatively common in suitable habitat, much of which is inside existing or proposed protected areas,” he said.
Imawbum, in the far north-east of Kachin state, could be a possible hotspot for red pandas, according to Fauna & Flora International’s press release. In most other parts, this shy mammal remains very rare.
Despite most of the red panda habitat occurring within protected areas, the species is threatened by hunting and poaching. According to a 1998 study, hunters reported red pandas close to their villages when these bamboo-loving mammals migrate down from the higher elevations during winter. While in many occasions, the hunters do not actively look to hunt the pandas, they often get caught in traps meant for other wildlife such as wild pigs and musk deer. The red pandas are also directly poached for their fur, which is primarily fuelled by Chinese demand.
“One Red Panda fur is apparently worth the equivalent of approximately $20 when sold in China,” Poole said. “These pandas are very timid creatures [and not aggressive], and once found can often be approached very closely.”
All commercial trade of red panda parts has been banned under the Convention on International Trade in Endangered Species of Wild Fauna and Flora (CITES) since 1995. Yet, illegal trade in red panda fur, fur parts and sometimes even meat, continues. Very little, however, is known about the scale of this trade.
Citations:
Hansen, M. C., P. V. Potapov, R. Moore, M. Hancher, S. A. Turubanova, A. Tyukavina, D. Thau, S. V. Stehman, S. J. Goetz, T. R. Loveland, A. Kommareddy, A. Egorov, L. Chini, C. O. Justice, and J. R. G. Townshend. 2013. “Hansen/UMD/Google/USGS/NASA Tree Cover Loss and Gain Area.” University of Maryland, Google, USGS, and NASA. Accessed through Global Forest Watch on Nov. 21, 2014. http://www.globalforestwatch.org.